What to know before you go, and a sneak peek of the new Presidents exhibit. 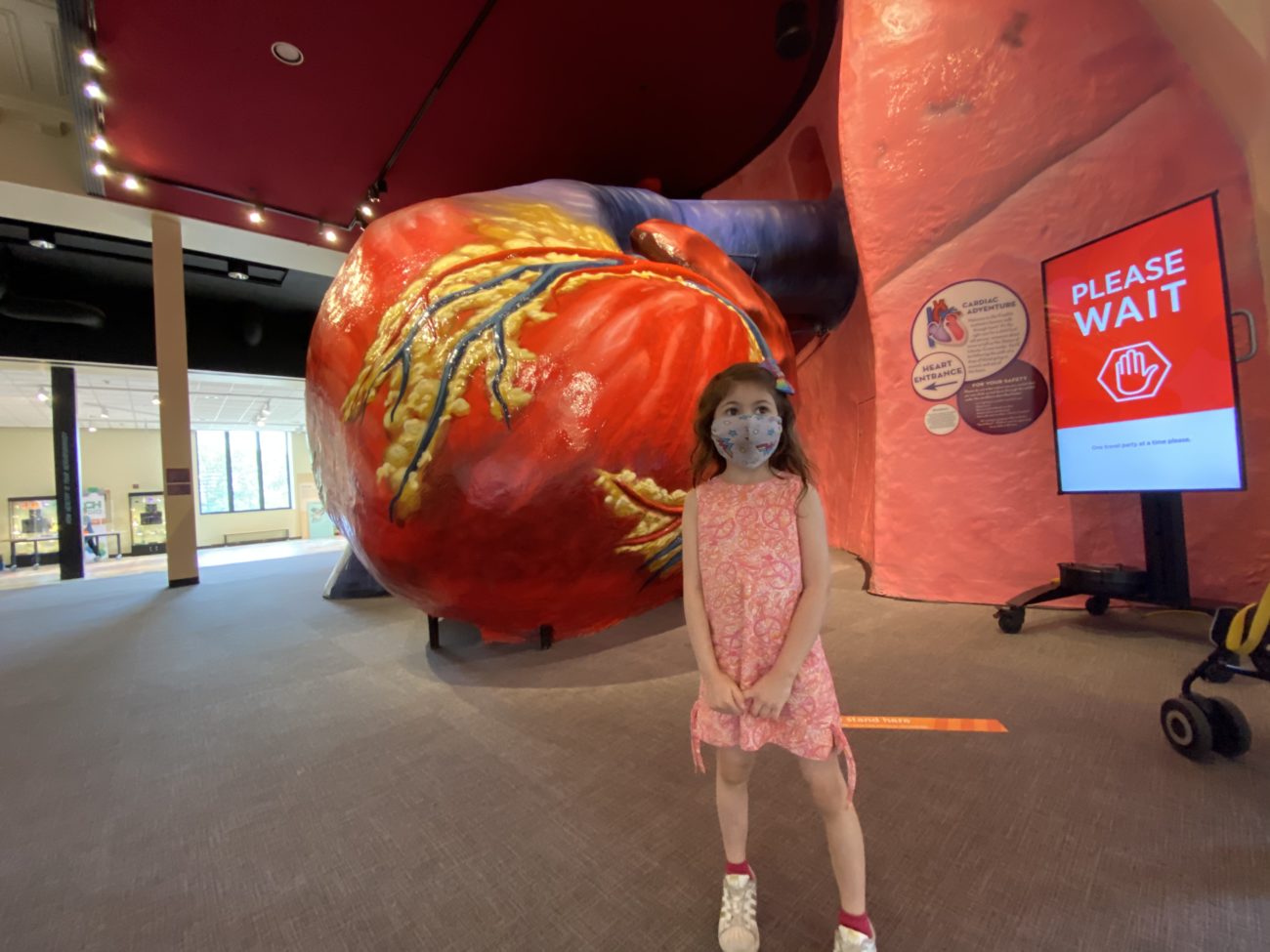 With much excitement, and heightened safety in place, the Franklin Institute is once again open. The museum opened Wednesday, July 8 to a reduced-capacity crowd, and with a brand new special exhibit: The Presidents by Madame Tussauds. And while some parts of the experience are different (or temporarily closed), we are thrilled to have exploration and fun back in our lives! We visited on opening morning to check out what’s new, and share what you need to know before you go. The museum will be operating at a maximum of 25% capacity. To ensure this, all guests (even members) must purchase hourly timed tickets in advance. There are currently no fees for purchasing tickets online. If you feel sick (or can’t make your reservation for any other reason), contact the reservations office at reservations@fi.edu or 215.448.1200 to reschedule your visit and open the slot up for someone else.

To further ensure social distancing, there are markers throughout the museum, and reminders to keep your distance and take turns in enclosed exhibits (like the Giant Heart and little rooms within the Brain’s street scenes). Signs, occasional audio announcements, and stationed museum staff are all there to remind you of these precautions, as well. For Live Science shows in the Atrium, tape marks off distanced seating on the steps.

Masks and no-touch temperature checks are required for visitors ages 3 and up. When we walked in, we were directed to two screens—one adult-height, the other child-height. We stood side-by-side and looked into the screens as our faces (and temperatures) appeared. Maybe we were just extra enthusiastic to be back at the museum, but this check-in detail alone was pretty exciting. You’ll notice many more hand sanitizer stations throughout the museum, as well as staff that are quick to wipe down touchpoints after you interact with an exhibit.

Eating inside the museum is not permitted. If you do get hungry, Franklin Foodworks is open with a limited menu and on a takeout-only basis. Order, pay through plexiglass, and wait at a numbered (and chairless) table for their bagged-up order to be brought to them. Once you have your food, you can take it outside to a picnic table in the Science Park courtyard, which is now open to guests!

Unfortunately, certain exhibits are currently unavailable because they have specific characteristics that make them unsafe to operate with the pandemic. These include what they describe as the most “hands-on” rooms: SportZone, Sir Isaac’s Loft, and Tech Studio. The Franklin Air Show is also closed right now, because the interactives in the exhibit involve blowing air currents that could create hazardous conditions (you know, since we’re dealing with an airborne infectious disease).

The IMAX theater is closed, since all movie theaters in the city are currently closed—but the Planetarium is open! The observatory is also closed, since there just isn’t enough space in there to socially distance. They will continue to feature virtual Night Skies at the Observatory on their Facebook page, so be sure to check our weekly events posts if you’re interested in tuning in. The museum has ramped up interactions with staff scientists and educators to take advantage of the small guest-to-staff ratio and make guests’ experiences as dynamic and individualized as possible. There are live science shows every hour in the Atrium (with socially distanced seating), live dissections in the Heart room (also with social distancing markers, and projected onto a screen in case you want to back up even further), and pop-up chats and insights from roaming science team members.

Favorite exhibits like the Giant Heart, Electricity, Your Brain, Train Factory, Changing Earth, Amazing Machine, and Space Command are all open—with some modifications and reminders to not crowd high-traffic areas. Real talk: we were a little hesitant to go through the Heart at first since it is so popular and narrow. But when we got there, we saw screens indicating when it was safe to go in and when we had to wait—we were the only two people to go through during our turn! In addition to letting families in one-at-a-time, they have also put protective coatings on high-touch surfaces like the Heart. There is also a hand sanitizer station right as you exit the Heart, which we used liberally. Get up close and personal with life-size wax figures, including every American president (yes, all 45 of them), plus additional historical figures including Ben Franklin, Frederick Douglass, Harriet Tubman, Rosa Parks, Malcolm X, Martin Luther King, Jr., and Michelle Obama (standing next to her husband, she’s the only First Lady represented in the exhibit).

For particularly interesting figures (sorry, no one is lining up for a selfie with Millard Filmore), there are interesting tableaux to complement the experience (and your photo op). Abraham Lincoln and Frederick Douglass both have empty chairs next to them so you can stage deep discussions; and MLK’s section includes a podium so you can stand next to him (little ones can take the stepstool out to see over it) and read “I Have a Dream.” Meanwhile, Richard Nixon is posed for his instantly-recognizable resignation speech, Herbert Hoover has a Hooverville tent behind him, and Jimmy Carter is standing next to a sold-out gas tank—the exhibit does not shy away from the fact that presidents are often divisive…and we haven’t even gotten to the 21st century yet. Towards the end, you can have a seat at the desk in the Oval Office for the ultimate portrait. The seat is empty, while Donald Trump is standing off to the side not looking particularly thrilled—you can draw your own conclusions with that one.

It is pretty sobering that 44 out of 45 presidents are white, and none are women. The exhibit seeks to balance that by putting prominent Civil Rights figures into their era (for example, Rosa Parks sits on her bus seat closest to JFK’s figure). When you are done viewing historical figures, Uncle Sam’s figure implores you to vote, and affect how these rooms will look going forward. Leaving on a lighter note, the final room has a figure of Madame Tussaud herself, fashioning a figure (very meta); as well as three celebrities: Beyonce, Justin Bieber, and Taylor Swift. My six-year-old daughter—spying a glamorous pop queen in the next room—impatiently dragged me away from Bill Clinton and George W. Bush…and she’s not wrong. ‘The Presidents’ is open through January 3, 2021, and tickets are $7 above your cost of admission. The Franklin Institute is located at 222 N. 20th Street in Philadelphia, and is currently operating limited hours. It will be closed Mondays and Tuesdays, and will be open 10 am—6 pm Wednesdays through Sundays. All tickets must be purchased in advance due to the global pandemic.